STOPS AND PREVENTS CORROSION AND RUST
CorrosionX Heavy Duty forms a dripless, dynamic, non-hardening, self-healing film that stubbornly resists erosion by splash or spray - including complete submersion in saltwater. It will slowly penetrate existing rust and corrosion, remove moisture and stop electrolysis. And then it seals moisture out. Unlike wax coatings, it will not dry out, stiffen or crack under stress. It will remain for hours on outdrives, even while underway!

Real World Case Studies
Whatever the application -- marine, auto, trailer, agricultural, industrial -- CorrosionX Heavy Duty is the best you can buy! Here are two case studies that point to the product's success:

Case #1
Situation: A swing bridge in Sergeant, Texas, operated by TX Dept. of Transportation requires two 5/8" x 600' cables to open and close.
Problem: Approximately 200' of cable is submerged under saltwater when bridge is closed. Rapid deterioration of the cables required replacement every 57 days on average.
Solution: Since the test cable had already been in use two weeks and rust was evident, the entire cable was first treated with CorrosionX Marine prior to applying CorrosionX Heavy Duty.
Results: The cable lasted 132 days and was replaced because of fatigue, not rust.

Case #2
Situation: Diesel Fuel Filtering, an Alameda, CA based company is in the business of filtering and purifying diesel fuel for boats at anchor.
Problem: It operates a 26' boat transported on a tandem-axle trailer. Both boat and trailer are in and out of saltwater on a daily basis, resulting in severe rust and corrosion of the trailer. Problems with electrical systems were common as saltwater attacked terminals and connections.
Solution: CorrosionX Heavy Duty was applied to springs, electrical connections, winch and other areas on the trailer susceptible to corrosion.
Results: Mr. Robert Sherman, owner of the company, wrote: "CorrosionX Heavy Duty was applied about two months ago and, as of this date, the barrier coat is still visible and apparently stopping further saltwater corrosion. A welcomed side benefit is the lubricating property - the trailer springs no longer squeak."
Savings: Undetermined but significant, according to Mr. Sherman. As he stated, "It's obvious the trailer will have much greater longevity."

CORROSIONX HEAVY DUTY is backed by a 100% MONEY BACK GUARANTEE – NO IFs, ANDs OR BUTs!

NB - Beware shipping the Aersol cans is classed as a dangerous goods, so these items will be shipped via road transport, which will take a few to get to you. 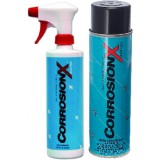